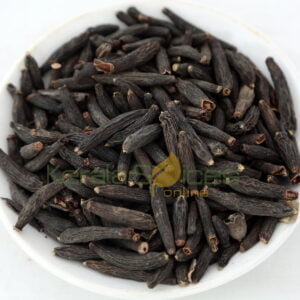 100 % authentic Pappadam made with black gram flour. It is very tasty and healthy.

Kerala Papadum / Papad – 250 Gm presented by kerala spices online .Papadams are always part of a Kerala meal which is made with black gram flour.

It is a thin flat round shape bread. It is either fried or cooked in dry heat.

Apart from kerala it is one of the major food item in the whole South India.

Papadums  are the favourite dish of kids.They would like to break the papadum and mix it with the meals.It is just kind of a savoury.

We can make many dishes with papadam. In kerala there is a tea shop snack pappada vada, which is very famous.

Also kerala papad is an intergral part in the sadhya (feast) .It gives a delicious taste when mixed with payasam (dessert) in the sadhya.

in Karnataka. Papad  in Punjab and Gujarat. In Odisha it is Pampada .

From region to region and from family to family Papadum recipes also may get change.

Papadum recipes, like most Indian recipes, vary by region and household.

They have been known to be made with lentil flour; green gram flour in places like Bikaner, a city in the northern Indian state of Rajasthan; and even potato, like those found in Varanasi in Uttar Pradesh—made with a spiced mashed potato mixture, spread very thin, and dried before frying, like a larger conventional potato chip.