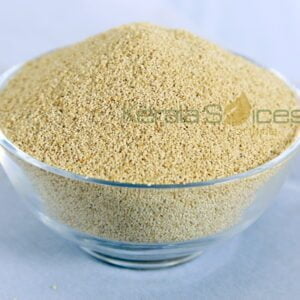 Best quality black pepper powder made from selected ones.

Black pepper, also known as the king of spices has a load of health benefits and a major benefit of consuming pepper is that it aids in weight loss. It is also said to be good for digestion and prevents cancer by detoxifying the body. When this spice is added to the food, it makes your food taste better and spicier.

Kerala’s black pepper is grown in the Southern part of the Western Ghats which melts into the Idukki district. The rich and fertile hilly soil delivers pepper that is spicy and has a tangent smell.

Black pepper or Kali Mirch apparently was used as currency in ancient Greece. This seemingly small black spice is power-packed with nutrients to improve your health. These include manganese, potassium, iron, dietary fiber, and vitamins C and K can be found in black pepper. It is also a medicinal spice that is attributed to its antibacterial, antioxidant, and anti-inflammatory properties.

It can be used with pretty much any dish – starting from the breakfast with the mouth-watering egg bullseye, which even the single guys can make, to the elaborate dinner dishes that are the pride of the womenfolk. Always crush the whole pepper to experience the full-on taste. Pepper can be powdered with an electric grinder and it is recommended to store quantities of about 100gm for easy access while cooking. You may also want to keep the spice in an attractive pepper grinder on the dining table. Stay away from the salt though….

The evergreen Chicken Kali Mirch is no stranger to any of us, with no restaurant menu being complete without this tasty option….

There are no reviews yet.